We (Stock City Cubs) are a baseball club with around 50 members founded by a couple of friends as one of the first clubs in Austria in Stockerau in 1991.

2003
Cubs win the BBL and are again promoted to the first national league ABL
2004-2006
solid perfomance in the highest league; participitation of many Cubs players in the national team; Martin Langlois leaves the Cubs to become national team coach; his successor will be Brett Cumiskey (USA) in the 2006 season; then Jim Malec (USA)
2007
relegation of the Cubs to the BBL after a disappointing year
2008
after a fantastic BBL season (import player Reed H. Brown (USA)) Cubs are promoted to the ABL again; Robert Buchelt (former Vienna Bucks) becomes coach of the Stock City Cubs
2009
U15 become runner-up at the Austrian championships and second junior league
2010
U15 win the Austrian championship
2012
U10 reach the semi-finals of the children’s league
2013
six Cubs players compete in the men’s B-Pool EM in Vienna as national players; Cubs 2 wins the championship of the „Landesliga Ost“ and are promoted to the „Regionalliga Ost“
2014
1st School Cup in Stockerau; for the first time in their club history the Cubs compete in the ABL Championships Playoff for the title of the national champion and are defeated by the later national champion; U15 wins the junior league title
2015
four Cubs players in the men’s national team to become B-Pool vice-European champion; a Cubs youth player becomes MVP at the Junior EM in the Czech Republic; 2nd School Cup in Stockerau; U10 Cubbies/Lions team win the children’s championship title
2016
3rd School Cup in Stockerau
2017
4th School Cup in Stockerau
2018
8th place in the BLA; 5th School Cup in Stockerau
2019
voluntary relegation to the 2nd national league in order to focus on the sustainable formation of young talents; foundation of the section „American Sports“ and cooperation with Martin Langlois to maintain the children with “English and Sports”; three Cubs and one former Cubs player were in the starting line-up of the first win of an A-Pool European Championship game; 6th School Cup in Stockerau

2021
Cubs I defend the title of champions of the 2. BLO, the second highest league in Austria; Wolfgang Talir resigns as president after 15 years in office; election of a new board consisting of 7 members 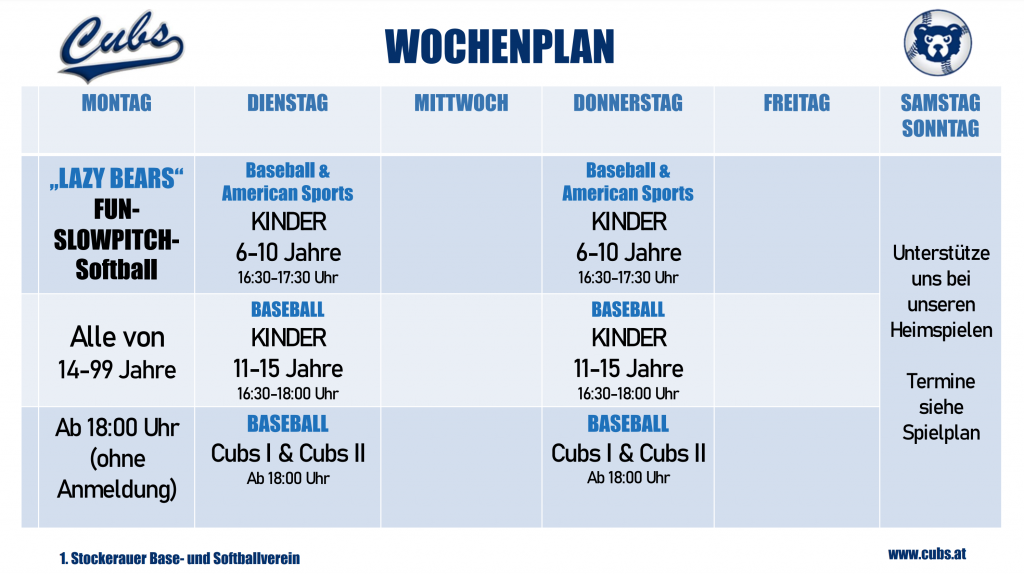